The trip to Seram was amazing, I was sad to leave. After our evening service Friday night in Samasuru, we packed up, said all our goodbyes (complete with 200 photos), and headed back to Masohi, so we would already be in town for our 8am boat ride back to Ambon island.

The best part of arriving in Masohi was catching up with the other half of the team that had gone to a different village—Nuweletetu. None of us had good cell signal in the villages, so our communication had been very limited. Though it was the middle of the night, and we had a 5:30am wake up call the next morning, we did some quick catching up before heading to bed.
The next morning at breakfast was a hum of activity, everyone sharing the highlights of their last three days. Though breakfast was loud, when we all got on the boat we fell asleep very quickly. 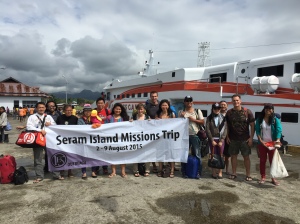 Back in Ambon, our agenda for the day was to have a final team bonding experience and debrief of the past few days. We went to buy some souvenirs, went to the beach front to eat rujak (fresh fruit covered in peanut sauce) and then a photo shoot at the beach. After dinner we had our final team meeting and went over the highlights and challenges of the past few days. It was so cool to be able to process with each other before we went back home and had to try to synthesize our experience and be able to explain it. 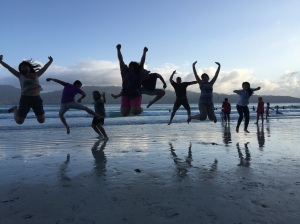 Sunday morning, our last day, I went with Korry and some of the other guys from our team to a small church about an hour and a half away, which was located one village over from Korry’s family’s house. After service she took us around to see where she grew up. We went to this really cool rocky beach, where we attempted to climb rocks. I didn’t know we would be adventuring, so I had decided to wear a long skirt. Side note – I don’t know how pioneer women did it back in the day, I was really struggling to climb being so restricted in my movement. Anyway, after the beach, we went to her family’s village and I got to see her school and the house where she grew up. We had been talking about visiting for the past two years, so it was so cool to finally see it! After the village, we ate a quick lunch and then headed back to where we were staying so we could pack up and get ready to leave for the airport.

Before we left for the airport, we decided to do one more photo shoot in our new Maluku shirts, which were a gift from our host for coming to help them. After that we took a full team picture, loaded up, and headed to the airport for our trip home. 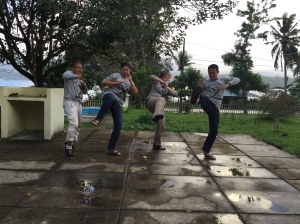 It was such an incredible experience. I was so honored to be able to be a part of such an incredible team. I ate some really weird food (which for most people would be a negative, but for me was a great challenge), had a lot of laughs, and learned a lot about myself, about the concept of team, and about God. I am excited to hopefully continue a partnership with such an amazing place and team in Seram and Ambon.