The last two weeks have been some of the hardest and most rewarding of my time in Asia so far.

I just spent the last two weeks in the Philippines participating in the Summer of Service (SOS) church planting program run by the Philippines Assemblies of God. This year there were a total of 14 international volunteers—9 from IES Jakarta and 5 from Australia. We met in Manila for training and then we were split up and were sent to five target areas to join the 80 Filipino volunteers already there. My group was sent to Looc Cardona in Rizal. 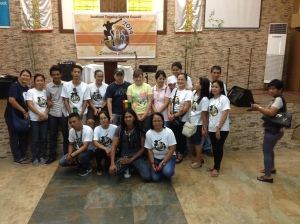 When I first found out that I would get to go on the trip, I was hoping and praying that I would be sent to a rural mountainous area—and I was! Looc Cardona in Rizal is a Catholic fishing village about two hours south of Manila. All 21 of us on the team stayed in a small one-room daycare. It was tight quarters, but we made it work.

The people in Cardona did not really speak English, so my main job was to accompany my Filipino squad partners and intercede for them while they were sharing. Initially it did not seem as glamorous as getting to straight up share the Gospel, but I think God was teaching me that it’s not about what one person does—it’s about how the team works together in accomplishing his goal. We are the body of Christ and no one thing is more important than the other. Everyone needs to do their part and together the goal is accomplished. After a couple days we finally found some people who spoke good enough English that I was able to lead them in a Bible study, which was so much fun. 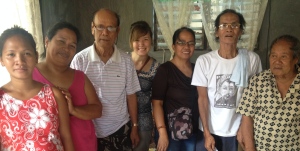 In addition to the great ministry opportunities, our Cardona team had a lot of fun together. Most of our team was very musically gifted, so pretty much anytime there was free time, one or all of them were sining and playing worship music. During our free time we would also play snakes and ladders, spoons, and some Filipino card games. It never ceases to amaze me that no matter how different we are on the outside, how different our life experiences are—you can always find common ground.

I was honored to be a part of the Cardona SOS 2014 team. Please pray for them as they still have four more days until the Grand Opening Service of the new church.

One thought on “a Philippines adventure…”