For most people to feel like it’s beginning to look a lot like Christmas means cookies, hot chocolate, and snow. When I first thought of spending the Christmas season in a tropic climate, I was a little apprehensive. I mean, would it really feel like Christmas in a tropical climate?

Today I decided to go to a coffee shop to get some work done. So I’m sitting in the coffee shop, drinking coffee, listening to Christmas music play in the background and it starts pouring down rain outside. That combination somehow made me feel right at home and truly feels like it’s beginning to look a lot like Christmas. I guess I had forgotten that I had grown up in Central Mexico where the weather is quite similar to Jakarta, particularly in it’s lack of snow. Apparently, rain to me is most people’s equivalent of snow. That’s not to say that I don’t miss some things of the American Christmas experience – but it was cool that being here in Jakarta for the Christmas season brings me back to my early childhood Christmases.

Three months ago if you had told me that I would want to be an expert in community health, specifically nutrition, I would have told you that you were crazy. After beginning to work in that area, though, I am finding that I absolutely love it! I was reading a UNICEF article on nutrition and it said that the first 1,000 days of a child’s life (prenatal to 2 years of age) are the most important in their development. If they do not receive the nutrition they need by then, it will affect them for the rest of their lives. I had never really thought about how much nutrition affects you. It doesn’t just affect your appearance, but it also affects your cognitive abilities, specifically it reduces your ability to learn.

Friday I had the opportunity to go to the trash dump community for our first nutrition program food distribution. We are providing all 45 children with a weekly food supplement–this week it was a hard boiled egg.

I understand that this feeding program is a just a small step in helping the trash dump community…but everyone has to start somewhere. I am excited to continue to learn more about what it looks like to plan, execute, and evaluate larger scale nutrition program in the future.

I’ve discovered my new favorite Indonesian food…bubur ayam (chicken porridge). Bubur is made out of white rice, a little bit of garlic, and a lot of water. It kind of looks like oatmeal, but since it’s made with rice rather than oats, it tastes different. Indonesians put chili sauce, peppers, green onion, chicken, and a special kind of bread crumb in it. They eat it for breakfast, lunch or dinner. It sounds very odd but is absolutely delicious.

The best part about bubur is that it is relatively healthy and you can change it’s taste based on how you are feeling. For example, last week when I was really sick, I just ate it plain…but when my stomach was back to normal Thursday I had it again, but this time I put extra chili sauce and green onions in it.

If you ever get the chance to try it…you should.

Saturday my team and I took a group of volunteers  to a community in North Jakarta to do a free medical clinic and children’s fun day. 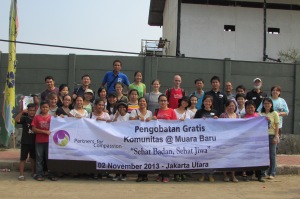 The community lies in-between a containment lake and a major road–so though it is quite long, it is very narrow. When I say narrow I literally mean about about 3 yards wide. When we had gone to look at the space it had appeared quite bigger–but I guess any space looks bigger when there aren’t mopeds and chairs lining both sides of the alley.

It started off a little bit like a traffic jam. Everyone was trying to figure out where they should be. Moms were trying to get their kids in line for the free clinic, volunteers were looking for their stations, others were setting up chairs–it was 15 minutes of what appeared to be chaos.  When you have any big event in a small space, though, a little chaos is expected. After about 15 minutes everything started sorting itself out and the event began in full swing. 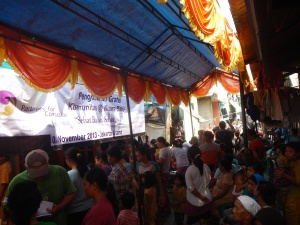 The first group of volunteers worked on the medical side of the day. We had some work at the registration desk and others work at the pharmacy station, where they disbursed not only the medicines the doctors had just prescribed, but some basic vitamins as well.

The second group of volunteers helped with the kids activities. This time we not only had our regular drawing, karaoke, and crupuk (Indonesian cracker) eating contests–but we also started a new soccer competition. 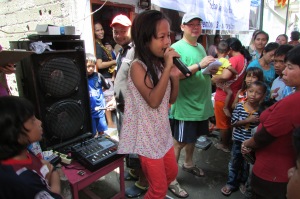 Since we had a very small space, instead of a typical soccer tournament, we decided to have a heading competition. Each coach would toss the ball at the kids and see who could head the ball the most in one minute. The winner of each round would be a finalist and would participate in the final head-off. It was a smashing success. Not only were the kids in the tournament having a blast, but the kids who were watching were having a blast cheering as well. 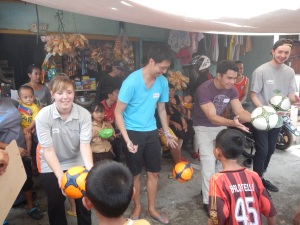 Every time I go into one of our communities I am continually reminded that this is why I am in Jakarta–and I absolutely love it! I cannot imagine being anywhere else.